After a few month break of racing, Ben from Mcrusty racing pings me and says he and Jo want to do the TWS race with WRL and are wondering if I'll come race with them again. I had a really good time racing their little toyota earlier that year at MSRH and I am (nearly) always up for a race at TWS. They did need another driver and I quickly brought Ron into the conversation and we were set.

Above: Ron pounding out laps. Below: Endurance racing sometimes gets pretty crowded...

WRL has three classes and they are computed on power to weight. We'd be in the GP3 class, the lowest horsepower to weight and I was hopeful that we could again punch above our weight and hopefully mix it up with the GP2 cars if possible. TWS has some long straights so that horsepower would be sorely missed, but there are also a lot of fast corners that a lot of drivers don't take as fast as they should and the little toyota is pretty balanced and has lots of grip....so I was looking forward to this.

Ron coming up on some traffic

The race was actually two races, one on Saturday and one on Sunday. Saturday we would race CCW ('normal' direction) and Sunday we'd run CW ('backwards'). Both races would be 8 hours long and so we'd planned on about 2 hour stints for each driver and see if we could catch yellows at times we could use them and see how we stood. It's a solid little car and Ben preps it well but in endurance racing, ANYthing can jump up and bite you so being adaptable is key. 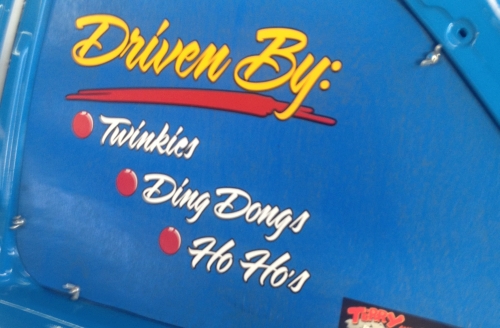 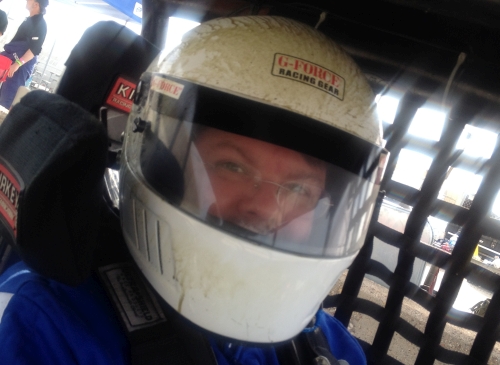 Above: MMMMmmmm snacks! And Ron's first stop was to clean his visor and secure the dipstick.

Saturday dawns and Ron starts the race. We'd done a short test session a few weeks prior so Ron got a few laps in and with GP3 starting at the back it really was fine. Ron quickly got up to speed and then we were black flagged for oil. It was a quick fix, the dipstick was unseating because the little holder was not secured. We secured it, wiped Ron's helmet visor clean and sent him back out to pound out more laps. (Great video of the dip stick peeking out the hood and spewing oil here: https://vimeo.com/99873033 action happens at about the 30 second mark!!) He stayed in the car for a long time, moving up in the standings steadily while dropping lap times nicely. Finally, he made a stop and Ben fueled up the car while I slid behind the wheel. Ron had started little car #38 in 38th place and had worked his way up to 24th overall (2nd in class) by his stop on lap 45. Great job!! 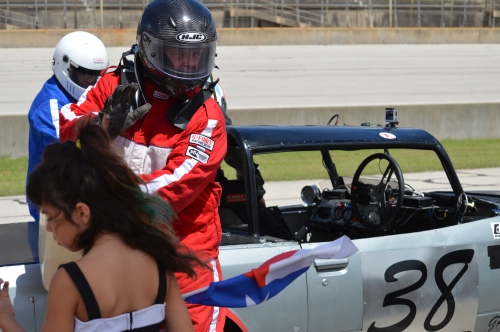 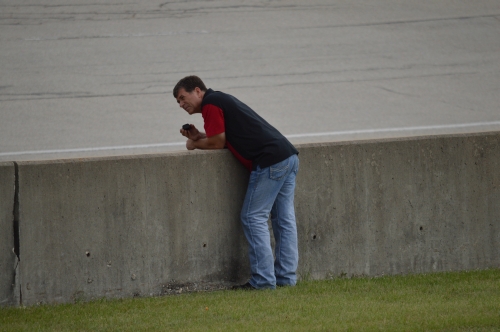 Above: Pitstop action with Ron just getting out, Costas going in, Ben fueling and our daughter Rossi playing in the pits! Joey, WRL Chief, surveys the situation.

Above: Me pounding laps and Below, the Poorvette working a LOT of traffic.

I got a handful of laps in and the motor began misfiring. I pulled in and it was looked over, a single spark plug wire that was suspect was replaced and I went back out and sadly it started misfiring about a half hour later. I came in and we changed ignition boxes and it was fine for a while. I worked to regain the spots we lost and then worked us up to 22nd overall and then the missing reared its head again and I had to come back in. We were in and out of the hot pits swapping ignition parts and tried everything except a new distributor (which we did not have) and eventually made more laps and then it simply got too bad to drive. When the checked flag flew, we were many laps down sitting in 28th overall and 4th in class. Ug. 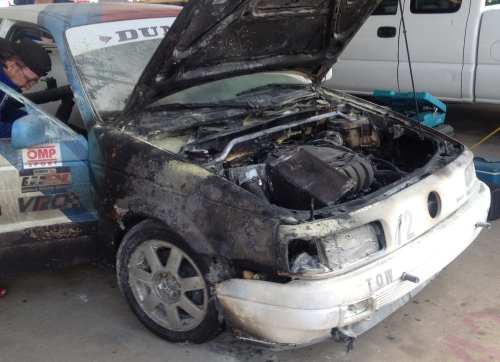 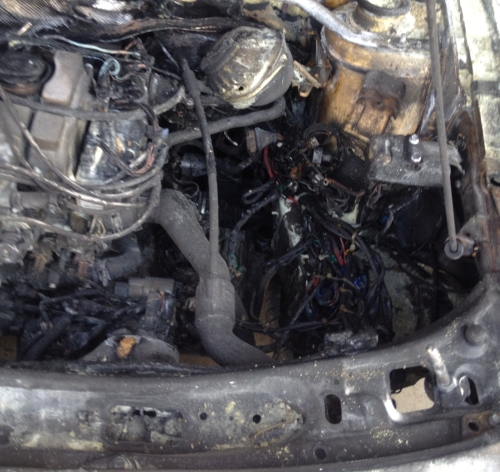 Above: CAR-B-QUE! Below: Random snaps. The LTD blew head gaskets first day, worked all night and ran the next day. Great job!!!

With time on our hands, the distributor was pulled and checked and although it was an almost-new unit, Ben discovered it was shorting internally and that was our problem. Ben procured another one that night got it installed and tested and we were ready for the next day. Wahoo!

Above: NOTHING could keep up with this car on the straights...it could WALK the PoorVette. It was thirsty and was lacking a bit in the handling department. Below: Uh....I got nothing. 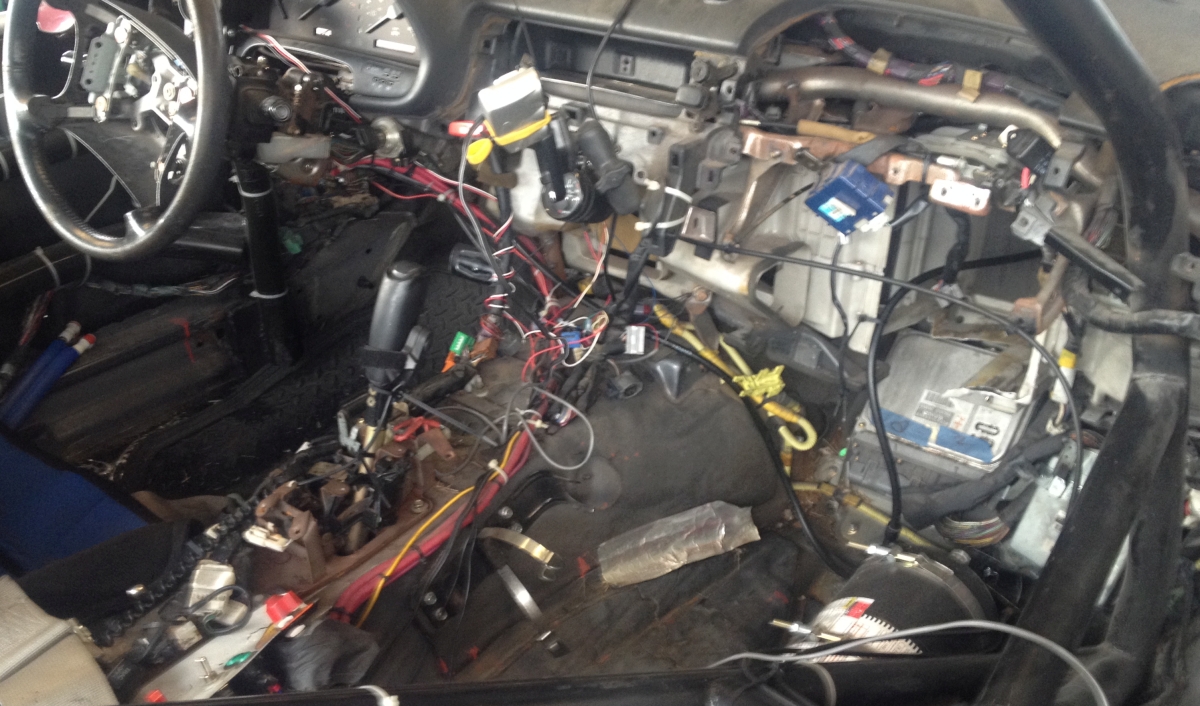 As a side note, Marc was there in the PoorVette and was having power steering leaks. They ended up retiring for the day and the team was not happy about it. Fair had done some of the work on the car at Vorshlag and Marc was asking Fair about help and Fair ended up pinging me seeing if I was in town today. I told him I was at the track and he asked if I'd go and take a look. Sure enough, a screw-in-to-AN fitting on the rack was leaking and it looked like a serious b!tch to get to. I told Marc to let it cool a bit and I'd be back. Later, I pulled a lot of parts out of the way and got to where I could remove the fitting and get some thread sealer on it and then put it back on. The way it sat, it was nearly impossible to fully tighten but using all sorts of rigged up stuff, I got it damn snug and pronounced it 'as good as it is gonna get'. They drove it around the paddock and to the service road and all seemed well but the real test would be tomorrow when they would try again to be first over 8 hours. They were doing well today and could match front-runner lap times, but the leak killed them. I'd keep an eye on them tomorrow and hoped they could bring a win home for Chevy! 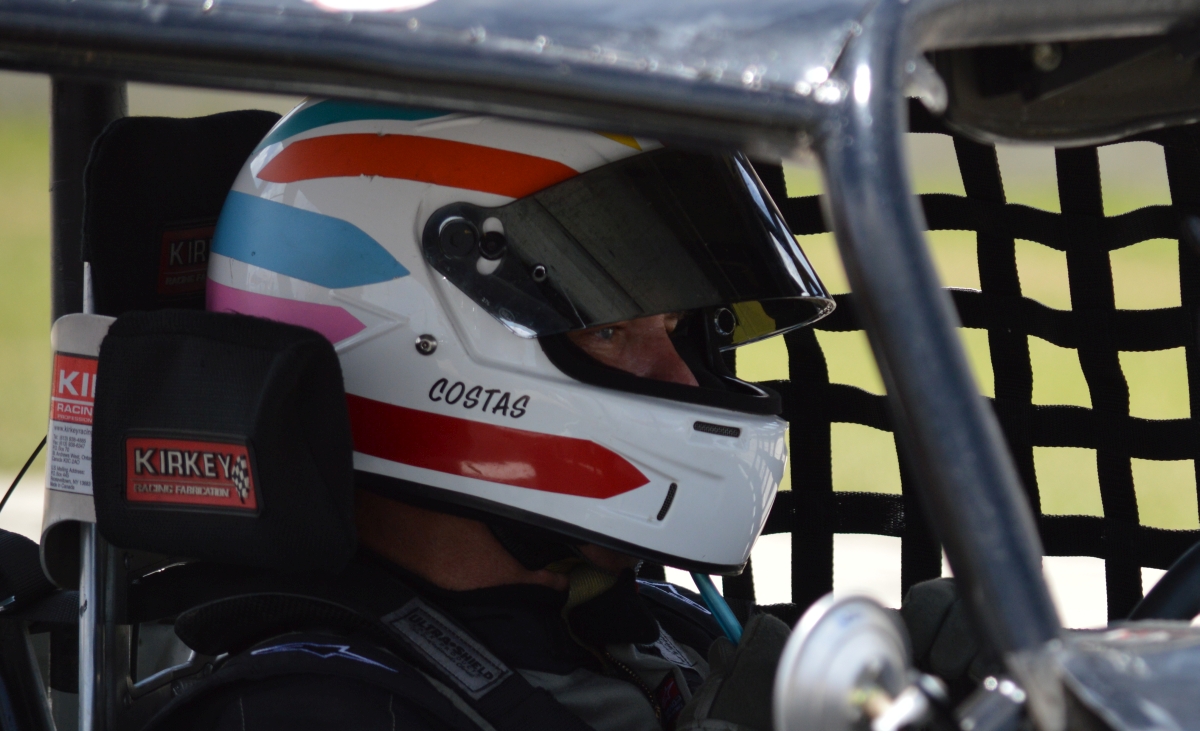 Taking a long drink during a splash-n-go. It was June at TWS and hot. I don't use a coolsuit.

Sunday dawned and we were in better spirits with a running car that sounded really good. It had that extra 'zip' when it was revved and idled cleaner as well. The PoorVette was looking good as well and Marc and team seemed to be in much better spirits while I hoped that the 'damn snug' fitting was damn tight enough.

Above: Long stop to swap a suspect fuel-pump. Below: A zen moment with my sweat while the car is fixed. I'm slowing my heart rate and visualizing the perfect lap. 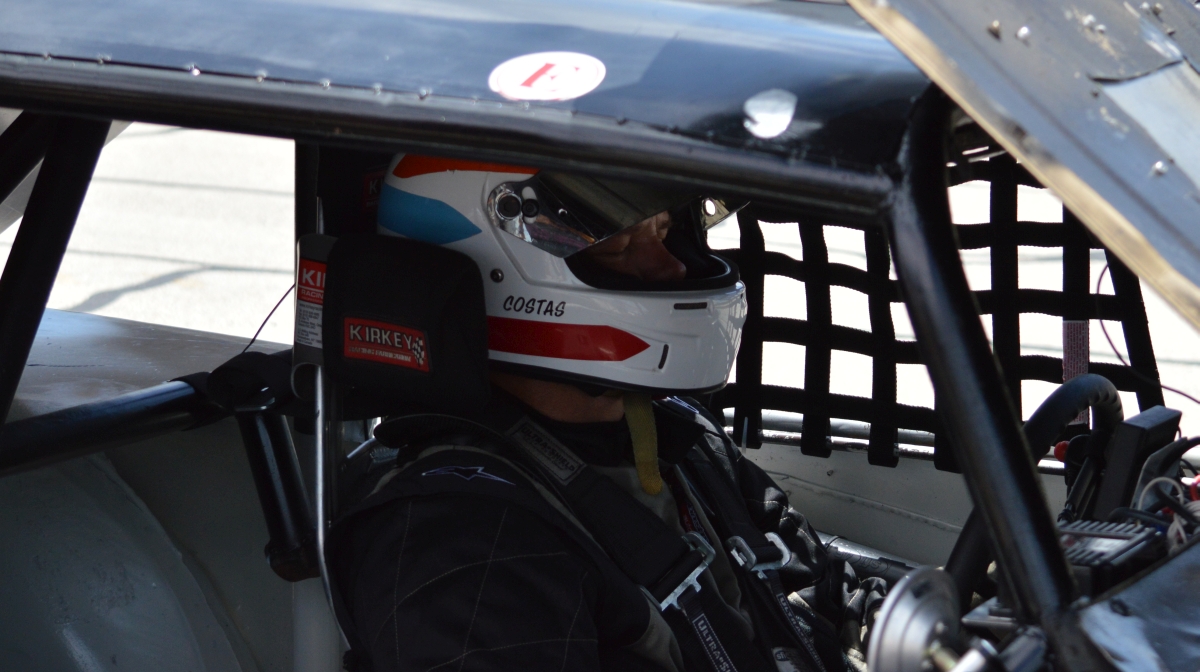 Ron again started the race as this was Father's Day and he was going to head home after the first part of the race. Anna and Rossi came out and I was treated to homemade snacks and cards and notes from my family. Talk about a good day at the races! 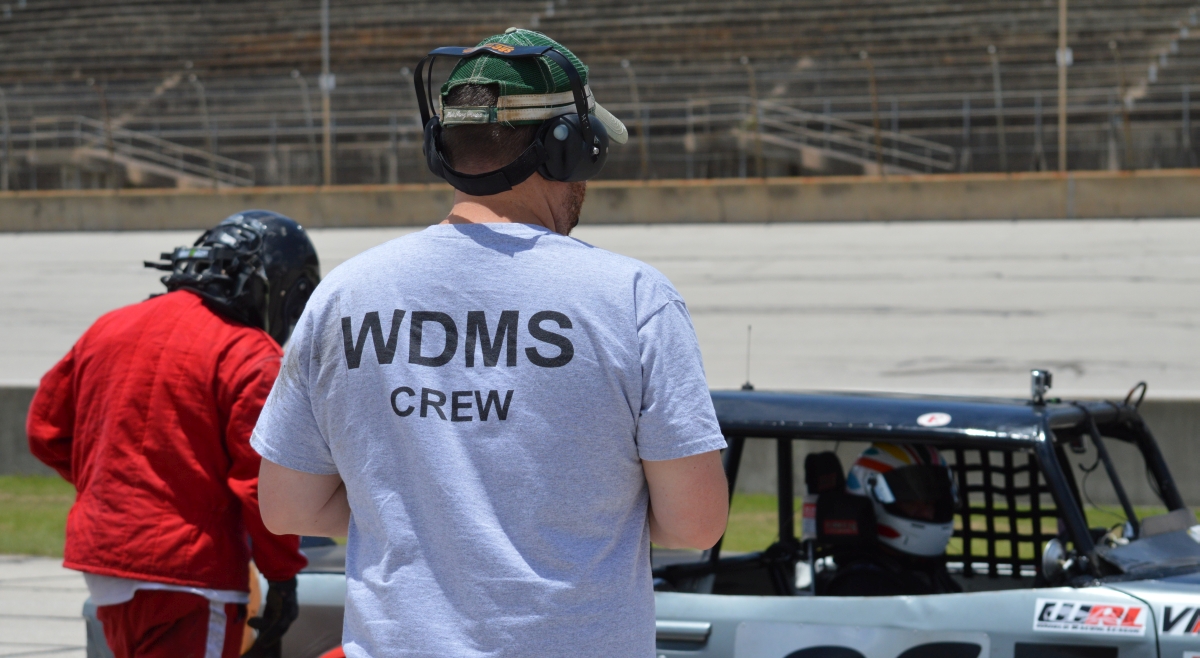 Above: Wrapping up a fuel stop, Ron is waiting to key the mic to tell me to go go go. Below: Ben waits, suited up and ready to take over for me. 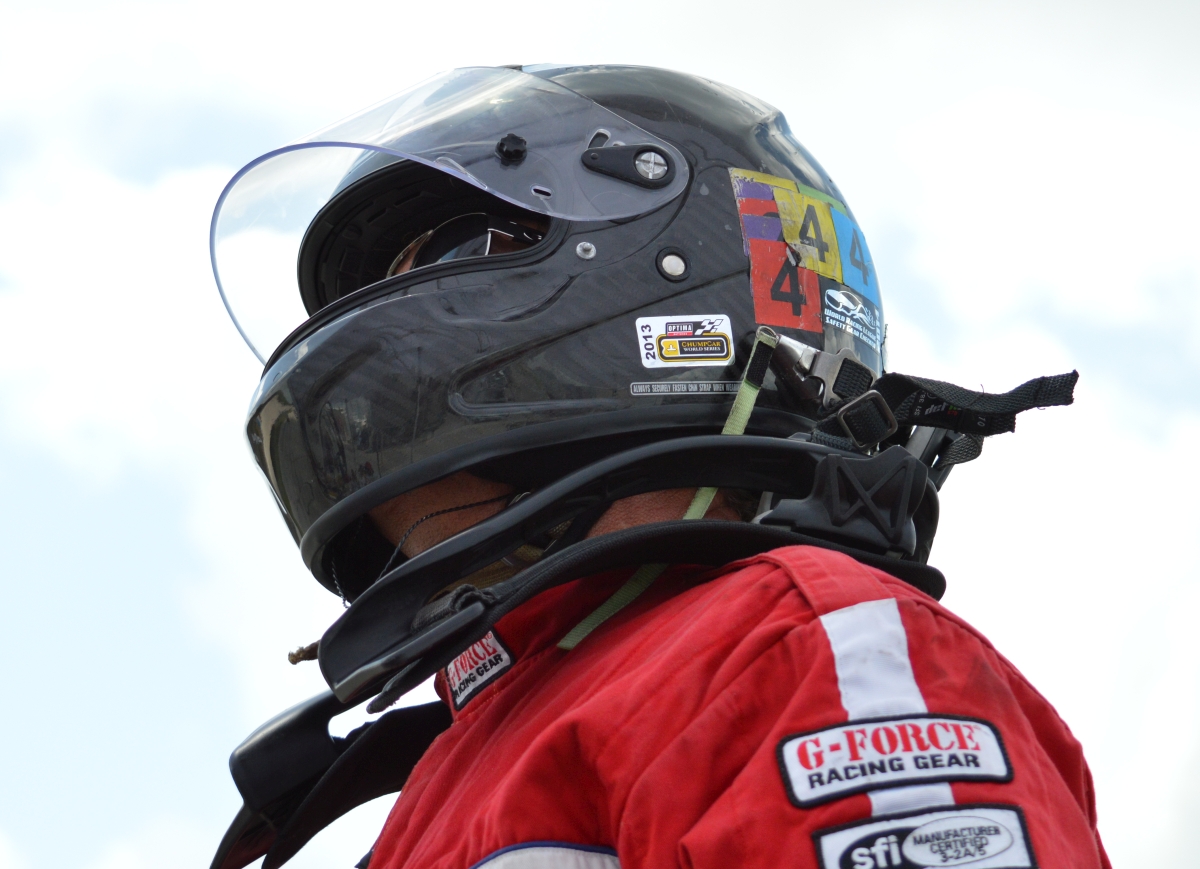 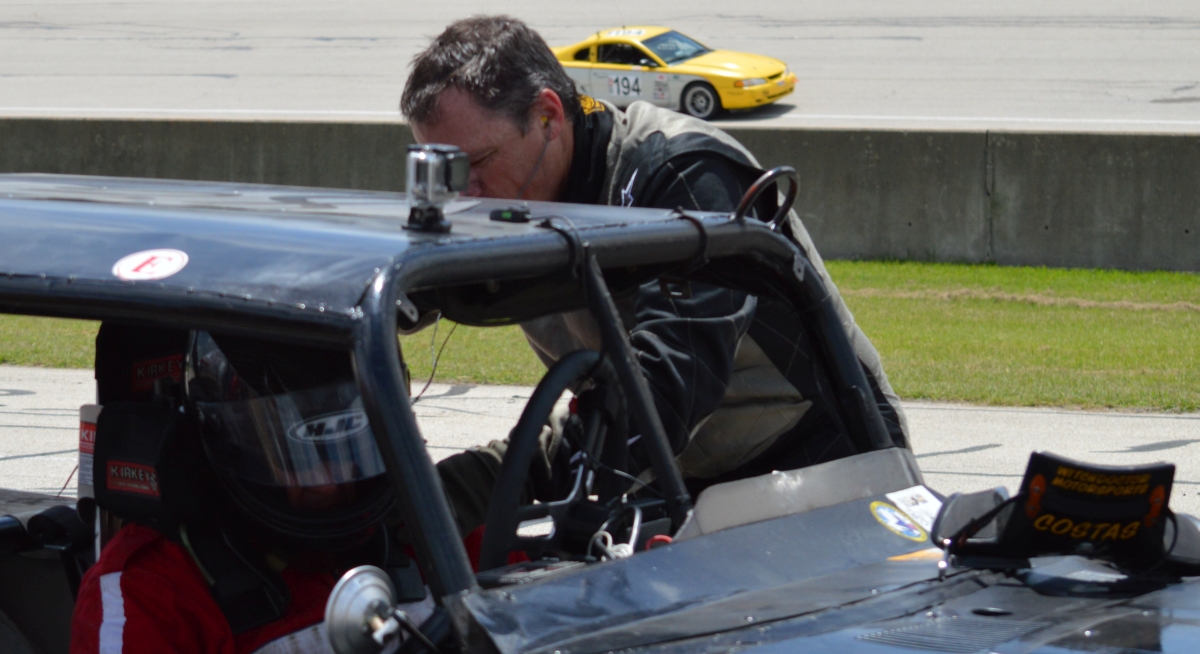 Above: Me getting Ben situated for his stint while, Below: Ron tops of the go-go juice. 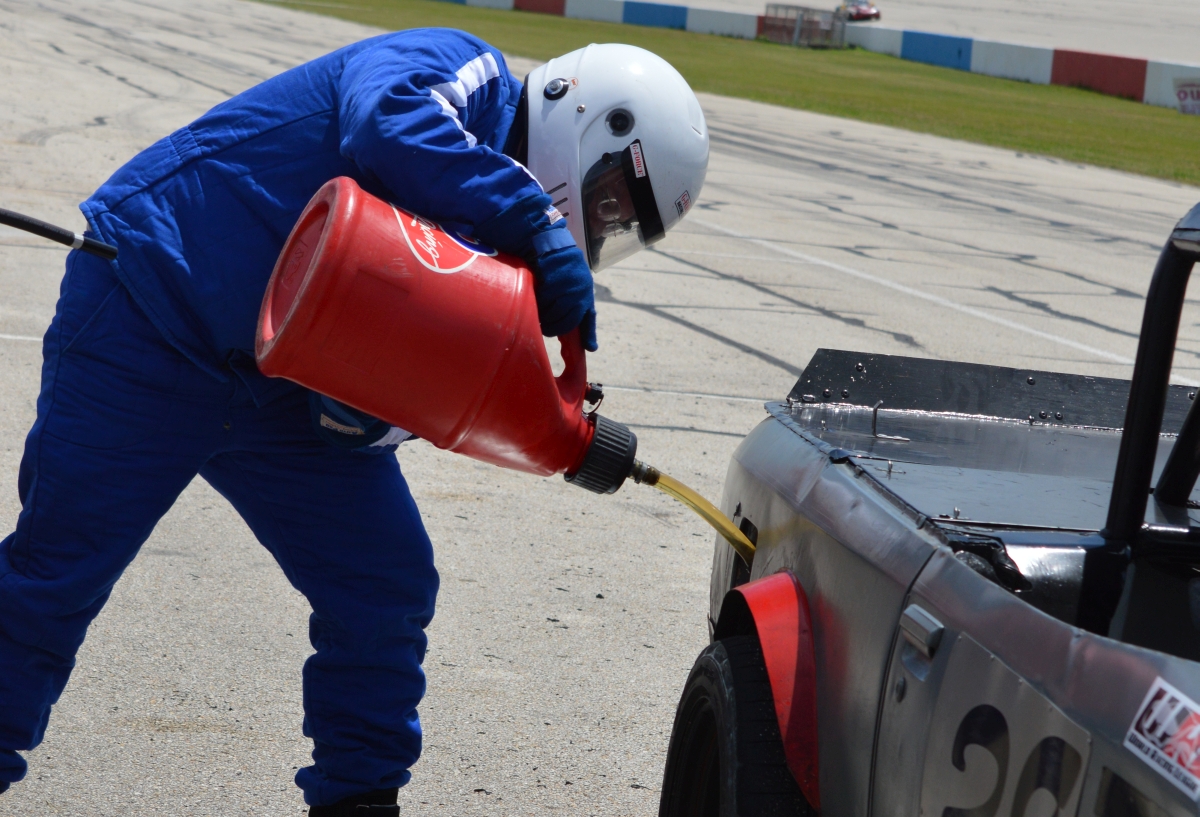 So Ron started in 30th and sadly had to come in on lap 5 for a quick checkover. Everything was fine and he went back out, but we'd dropped down to 36th in the process. Ron started to click off some great laps and just kept on motoring. Back to 33rd, then continuing to improve to 29th on lap 20. Ron steadily worked us up into the mid 20s and had a quick splash of fuel during a yellow on lap 38. He clicked off another dozen laps, keeping us in the mid-20s until he pitted on lap 51. His fastest lap was a 2:11.2 which was quickest of all the GP2 cars up to that point! He was grinning ear to ear and stuck around for a while and then headed home to his own family and the Father's day that awaited him. 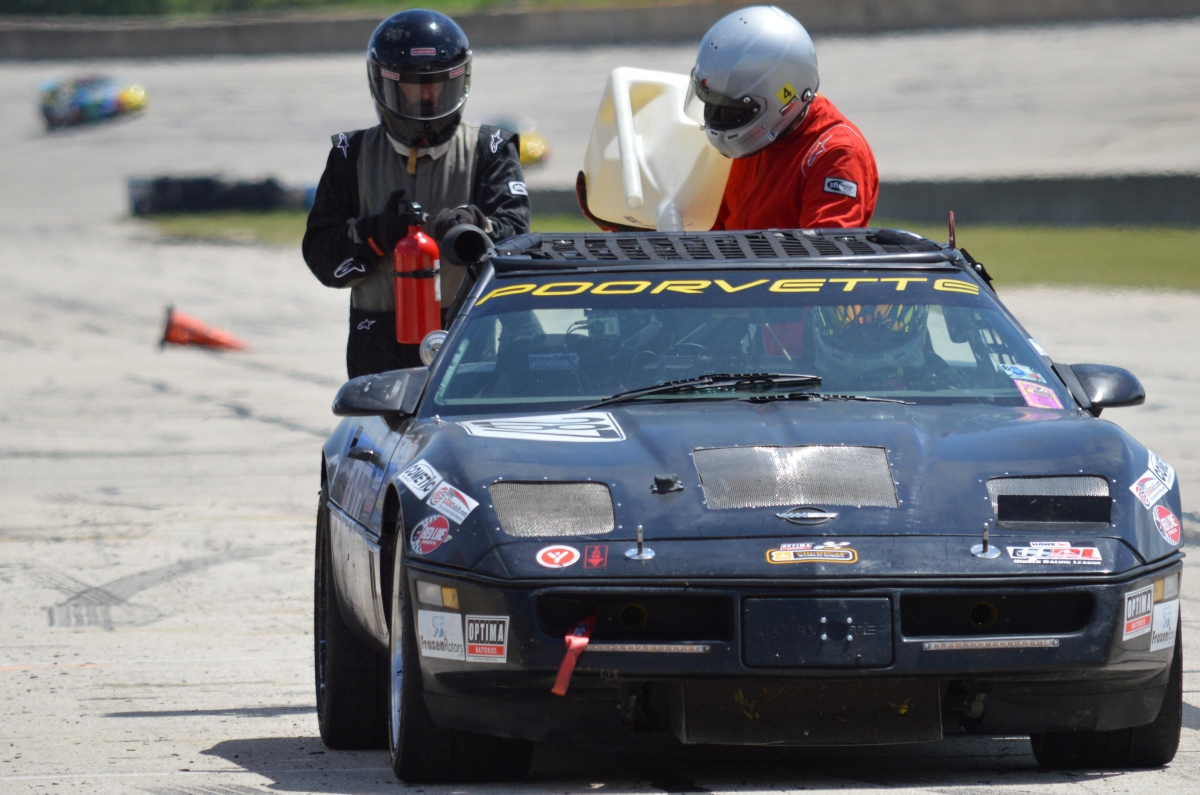 Above: Team PoorVette gets a splash of fuel while the Talon spools up the boost to scoot down the front straight. Below: Ben getting his car checked prior to entering the fray.

I slid in the car and went to work, using every inch of the track to try and keep up momentum. Most other cars were GP1 and GP2 and theoretically faster than us, but the little toyota kept passing a lot of them. From starting on lap 51 to lap 77, I kept at it until a yellow (for a VW doing the car-b-que thing, complete with huge flames) gave us a quick fuel stop. A quick stop again for another splash of fuel on lap 95 really didn't make sense as the car should have had plenty of fuel, but I was getting weird fuel-starve issues. A long stop on lap 112 saw us drop a lot of positions as a fuel pump was swapped and I went back out with the car alternating between running perfect and then occasionally fuel starving for long seconds. With the car at full song I threw down our quickest lap of a 2:08.7 on lap 114 (vid here: https://vimeo.com/98458513) before getting out of the car on lap 127 and handing it over to Ben to bring it home. We were in 19th overall and 2nd in class when I got out after my stint and I felt I got everything I could out of the little car. The handling and brakes were consistent and great, and hopefully the fuel delivery issue would not hurt us anymore. The leader in GP3 was only a few laps ahead of us and maybe the gremlins would strike them for a change.

Above: Me dumping fuel for Ben and, Below: Ben waiting for the GO signal.

Ben drove smart and fast and basically drove around the fueling issue as I did and enjoyed many full power laps and also endured a few painful laps as well. On lap 171 Ben was really hooked up and put in his fastest lap of the race, a 2:10.2 to equal Ron's best lap time as well! Ben worked traffic very well and crawled us up to 17th overall (and still 2nd in class) when the checker flew. We were ecstatic to podium, but also sad because without the minor fueling issue we had the pace to win our class. C'est la vie! 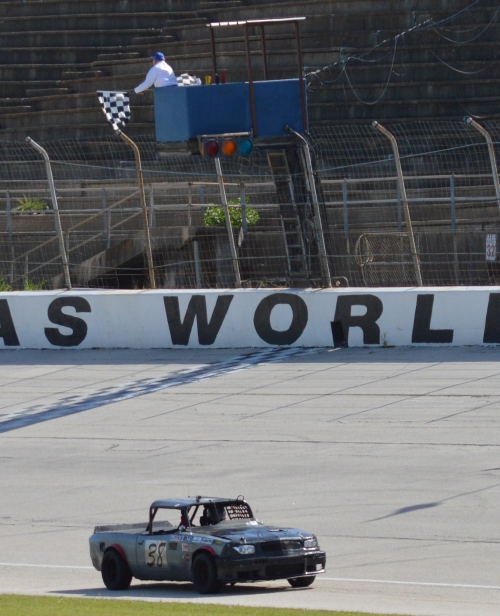 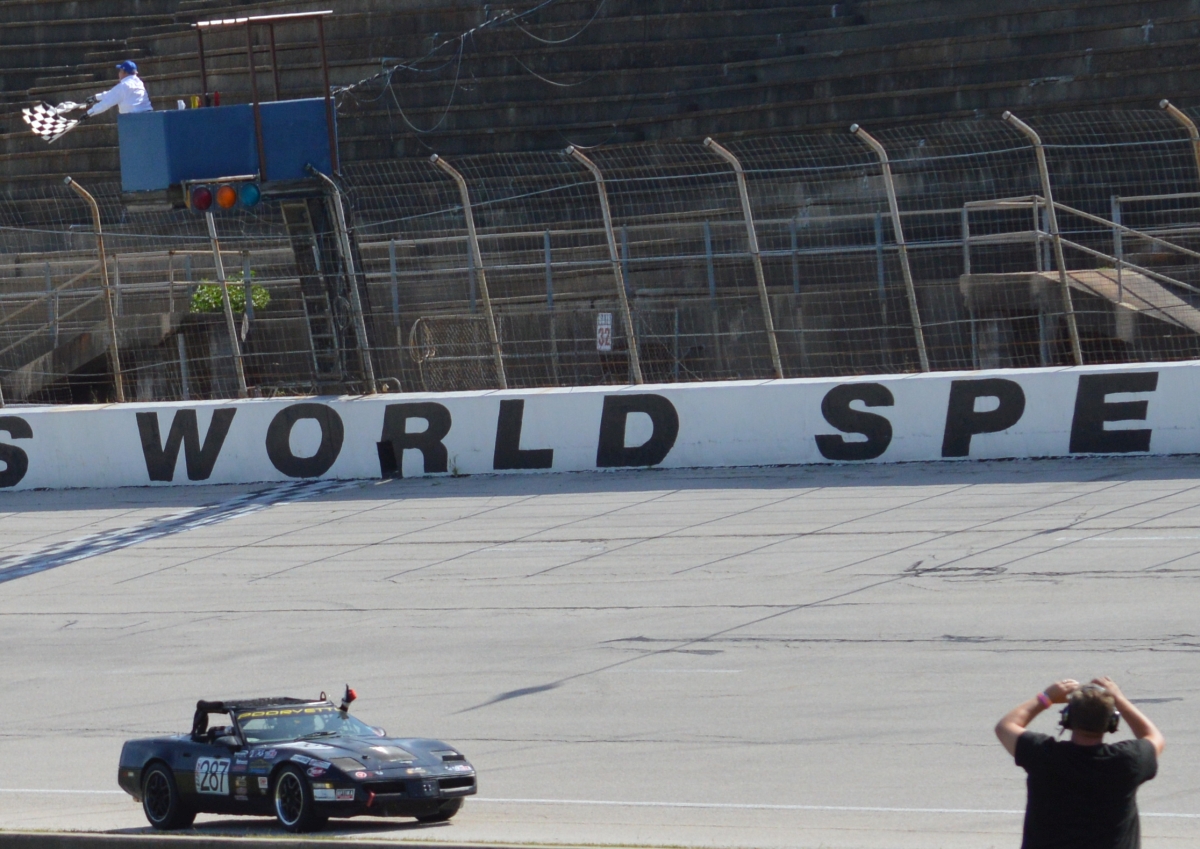 More good news saw the Poorvette team win GP1 and overall in the not-leaking-power-steering-anymore Corvette! They fought back from an early lengthy pitstop to end up going neck-n-neck with another team and only winning by 1 lap! Marc and crew were extremely happy and treated Anna and I to a nice Grub Burger dinner that I was very thankful for! Having our little GP3 podium finish was very nice, but it was really cool to see the PoorVette team get the overall and GP1 win. Great job guys!!!

HUGE THANK YOU TO BEN AND JO for letting me and Ron play in their sandbox and for Anna and Rossi to come help out as well. A great family weekend!