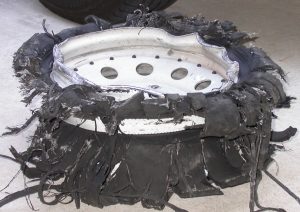 It was deja-vu all over again as I was headed to TWS very early on a Saturday morning to be at the gate about 6:30. The previous Saturday, Nick and I took my roadrace car to an SCCA event (also running backwards) and did the same thing. All was going well as I was 2 hours into the trip when I narrowly saw and avoided a piece of angle that was in the road. I barely saw the dark form in my lights as it missed my driver’s side truck tires. Which means, da-WHAM, the trailer tires go right over it (trailer being wider than truck). It was an evilbad noise. All was ok for a few hundred yards as I was slowing down already when one tire blew and the other blew right behind it. Great. Two flats. At 6am outside Caldwell. Thankfully there was a paved shoulder and I put the right side tires pretty far in the dirt (that held fire ants) to give me room to change the left two. Both tires were demolished down to two small rings of rubber on each wheel. The leading wheel is destroyed but the trailing wheel looks usable. I put out the wood ramp and pull the trailer up it, then put the bottle jack under the frame to lift a bit, and pull the trailing wheel and put on spare #1. Then lower everything and back up the trailing tire on the wood enough to swap out the leading tire. Roll back forward, torque it down, put everything away and back on the road in about 20 minutes with a few fire ant bites keeping me scratching the last 30 minutes to TWS. This is why I carry two spares and keep the tire-changing stuff right by the door. 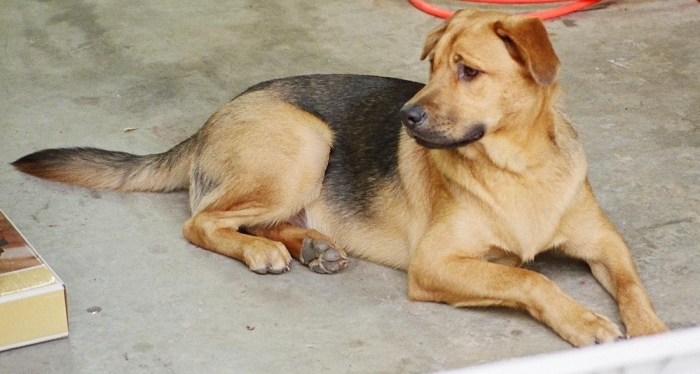 Complete random picture of Race. Don't try to make sense of it, just enjoy the pic.

I still made TWS a bit before 7am and catch Mike as we are signing the waivers. He staked out a good paddock spot the afternoon before and in less than 30 minutes we have our cars out, my trailer canopy up (the ‘big shade’) and are ready to go. A quick instructor meeting and the weekend got started. 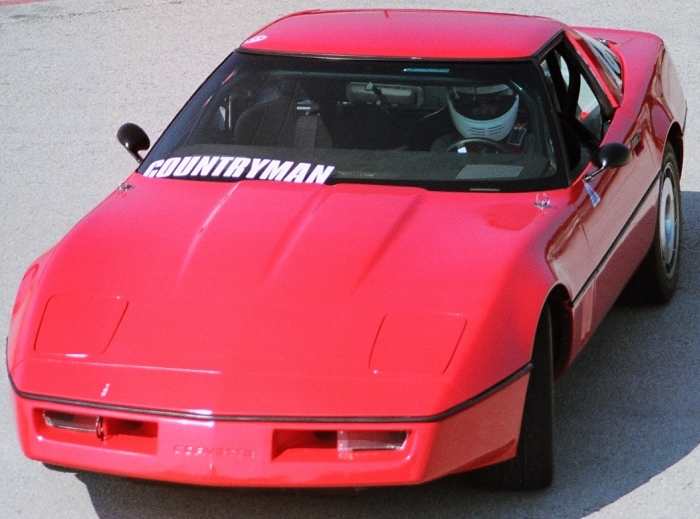 Mike pulling in the pits (I'm on the trailer).

Mike’s slug really REALLY looks good now that he has it all painted Revlon-red. He was sorting out some carb and jet issues but he is well on the path. I took a few runs in the B4C with the DL1 capturing data while I also took video (thanks for loaning, and installing, the harness/vid cam mount bar, Nick!!) and I am going to try to use a program that syncs them and allows you to put the DL1 data on the bottom of the screen to see the data as you watch the laps. I’ll keep you updated.

TWS was very unforgiving and bit at least 3 M3s, two Hondas and a Miata (and those are just the ones I know of). The first M3 was taken at the end of the straight going from T3 to T2 and I heard it was ball joint failure. For those of you that know the track, I looked over and saw him as I was partway thru T2 and he looked to be 90% to the banking by the time he stopped, facing the track, passenger front wheel at a decidedly non-stock angle. M3 #2 again went straight off, but this time at the entrance to T4 (before the tire barriers) and he went thru some fencing and did an air-bag test (still works!) into a ditch. Rumor was brake loss, but on Sunday I heard the driver confessed to brain-fade and not brake-fade. M3 #3 (Bobby’s) I was riding in when we went onto the banking and a battery light illuminated on the dash. We slowed on the front straight to find no power steering going into the esses and I surmised we lost a belt. Not knowing if the water pump was belt or gear driven I inquired what the temp was and Bobby immediately looked and shut the car off. A rope tow in and a flat tow home as the belt took out some fan blades. One Honda blew something going into the esses and left oil (that I ran thru in Mike’s slug) in a nice line until he pulled off in front of us. Smoking. I don’t know what happened to the 2nd Honda (s2) but they were winching it on the trailer at the end of the first day and it sat for day #2.

The Miata bit the T4 tire barrier (just outside the T4 exit) directly in front of us. It was scary. There was a red Miata, a blue Miata and then an s2000 and a Camaro SS in a row going into the back straight. The s2 points the SS by (I was instructing the SS) and we are now behind the two Miatas going into 6. Everything is fine into 6 and then 5, but the blue Miata (in 2nd) is a little late getting back in line for T4 (left hander 90 deg, downhill). The red Miata brakes a bit, then comes off the brakes and turns in maybe a few feet late and starts down the hill. The blue Miata is maybe 4 car-lengths back and goes an easy 20’ deeper (and my spin-sense begins to tingle) and then just whips the wheel to turn left and the car turns and the back steps out (my guess is that he got on the power a bit). Another second and the car is now really hanging out the tail to the right and the driver starts to counter steer (spin-sense REALLY tingling now) as the SS driver isn’t sure where to go. I point and yell ‘LEFT’ as we go hard on the brakes and left (thankyouABS) as the Miata finally ‘catches’ and very quickly and violently snaps back HARD to the right and exits the track quickly gobbling up the few feet of grass and very hard into the tire barriers completely broadside on the drivers side. As we pass I look at the helpless instructor as he raises out of the car a good bit and generally tossed about, then, as I hang my head out the window and look back, tires are falling back down onto the deck lid of the Miata. We go thru T3 and the red Miata is pulled way over pointing us by so we take the lead, slow down and put fists out the window. There is no question this will be an all-black so there is no reason to have additional laps. We lead the train into the pits and the session is over. Later, I hear the student and instructor are okay, but rattled. I am quite sure it rang their bell and am very happy they are all right. The image of the instructor as the car hit the tires is very fresh in my mind. 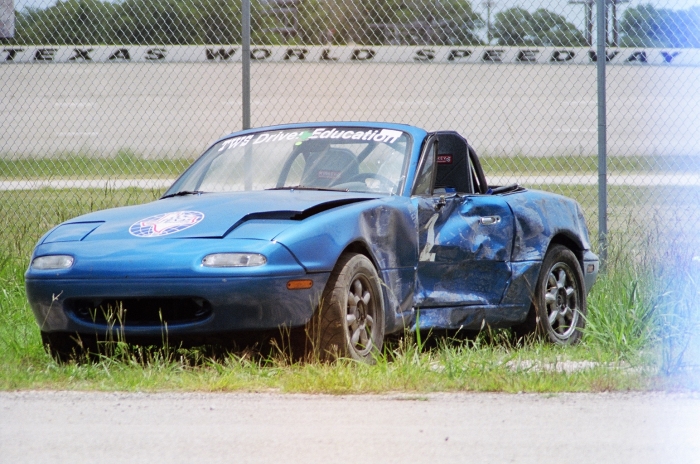 Above and below: The carnage of the T4 tire wall. 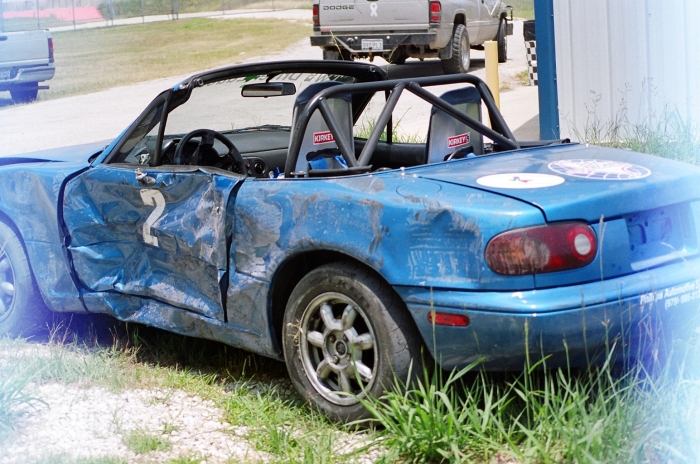 A Porsche and a Toyota also were rope-towed in but I don’t know why. I saw the Toyota get put on a u-haul dolly Sunday morning so his day was done early. A fox Mustang (supercharged) had some issues too but I never found out specifics. A c6 owner corded two tires but had lost his wheel lock key. I had them off in about 20 minutes so he could get them swapped. Yay for the big toolbox! 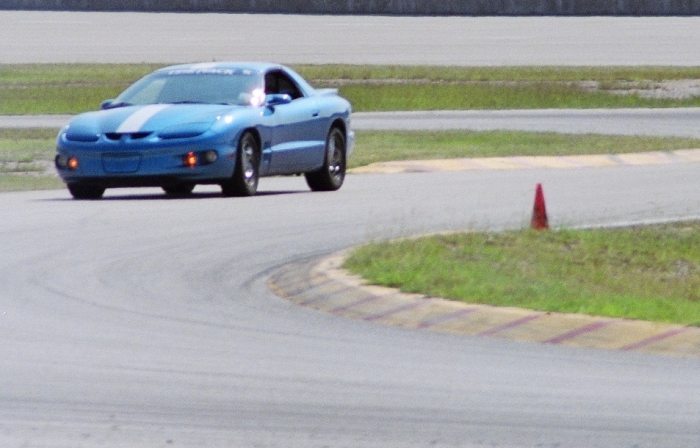 Chad getting into the carousel.

I rode with Chad some and he is very quick. We played with F-Body lines and tried some different things and picked up some speed. He and I were both on the Goodyear GS-CS’, which is just an awesome tire for this kind of stuff. I had hoped that Chad, Bobby and I could all be out together for some playtime but it didn’t happen.

Chad in the esses.

My student (Craig) in the SS did awesome and hopefully comes out again. It was his first motorsports experience (no ax, no anything) and he did great. The car had ceramic pads on powerslot rotors and a cam/long tube motor putting 396 to the wheels. It was a hoot down the front straight, especially when we caught a viper at the beginning of the straight and he saw us then nailed the gas. At the start/finish he looks back and we are still RIGHT on him. He dropped down and pointed us by and within a few corners we were gone. Craig never dropped a wheel off as we took steps to go faster and faster. He is ready for the next group up for sure.

Near the end of the day on Sunday, Todd and Tye showed up on the way back from the Houston autocross and hung out for a while. I got to take Tye for a spin in the B4C and Todd got to answer a few hundred questions about Son-of-Rust and if he was going to put it on the track or not.

Bobby (obviously before the belt incident) going in the esses.

As always, the TDE folks were awesome and the organization was top notch. I’ve read about other DE organizations on forums and such, and some sound absolutely horrible. I’m happy and honored to help with TDE and they do put on a first class event. We didn’t have any metal-to-metals and the incidents that did occur were mechanical or brain fade, not anything due to corner workers, administration or organization. Students are grouped according to ability and it is a very nice and friendly atmosphere.

Chad heading to the carousel.

The trailing trailer rim ended up being usable after all, and Firestone had me in and out in 10 minutes on Saturday at 5:15. Thankfully the trip home didn’t require any stops!