So after Hallett, the motor came out of Scratcher. It had been a conceived as a "2 year" motor and it had been in for almost 4 and although it still made good power it was still using a bit of water and that wonky temperature gauge had me concerned. I was still winning races and setting lap records, but having to deal with cooling problems is nothing I want to do, so the motor came out.

Batman was completely astonished when it was torn down. The bores were nearly perfect. The rings in almost new shape. The bearings, which were ceramic coated, only had a few that had very light scuffs on the coating (no bearing material was exposed on ANY of the bearings!!!) them while most of them looked brand new. "Why did you even pull this out and bring it to me?" was the question I got. Indeed, the motor had seen a LOT of action, but I'm conservative on my tuning and I use good fluids.

Glancing back at my records this motor had been in the chassis 3.5 years and had produced:

So yeah, I was super happy with it, but the water consumption had to be stopped. When the heads came off, some corrosion was found that was getting slightly by the headgasket so Greg (best...cyl head guy....in the world) welded them up and said "this is the final go-round for these heads, but I think they'll work". My heads were originally NASCAR heads, then they went to a Trans-Am team and then they went to a club racer and then to me, so they had been plenty heat-cycled and the metallurgy of these older heads is a known weak spot. The bearings got cleaned and recoated to get the clearances spot-on to what Erik wanted and the rest of the parts were all cleaned up and checked, checked and re-checked. One rocker was replaced due to a corner fracture and one pair of lifters were replaced due to some (very light) odd scuffing. Other than that, the motor basically stayed the same and I was looking forward to another few years assuming the heads were ok (foreshadowing).

So about 2 weeks after dropping off the motor, Anna and I went down and helped put it back together and then we were sliding it back into Scratcher with not much time leftover to get ready for TWS. Rain was on the forecast so it was going to be interesting. 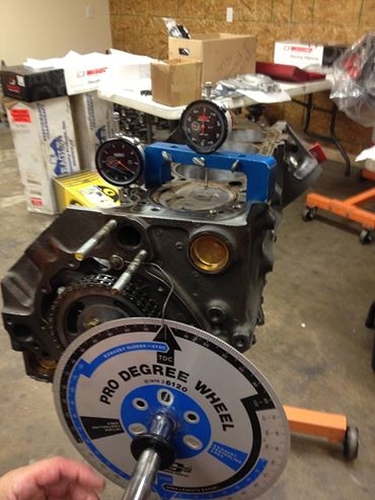 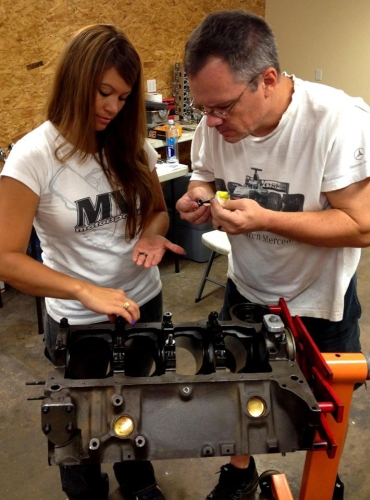 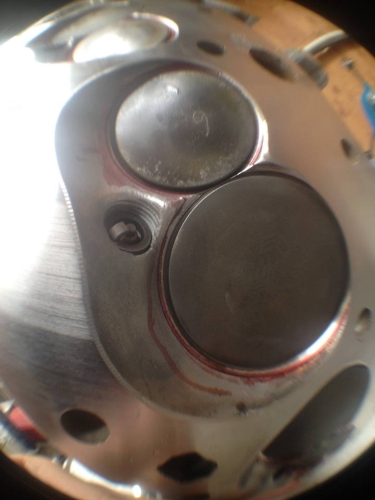 Most interesting was the championship battle. While I had TTU sewn up at Hallett, SU looked to go down to the wire with all four TWS races and then all four ECR races being critical. With an eye toward the championship, I simply was going to take it easy for the races and get solid finishes. For TT, I'd throwdown and see what kind of times Scratcher could do. In the grand scheme of things, I HAD to finish all four SU races so that was the focus.

With TWS being local, MFW and I dropped trailers early to snag a good spot and then when Saturday came, we were ready to go.

Saturday showed up and the rain did too, just as predicted. I won't bore you with the details, but it was not pretty. For qualy, I was on my slicks from Hallett and went about 30 seconds slower than normal. For the first race (R1), I was actually leading the SU class until the final lap when my windshield (lexan, no wiper) just fogged over on the inside and I actually had to stop and let it clear. In pulling off, I went into the grass for a moment and then came back on and then limped back in, taking 3rd place. For the second race, R2, Anna rigged me a stick with a wad of paper towels on it to wipe the inside of the windshield and that worked much better an although I started near the back, I still worked my way up to third in class and took the checker there. The wet and cold were working against my slicks and for the next day (if it rained), I'd pull out my old slicks that I'd put grooves in and see how they would do. The forecast was for NO RAIN on Sunday, but we all know how accurate forecasters are. On the bright side, in the afternoon, it dried up and I went out in the final TT session and threw down a 1:45.1 to take the TTU win and set fastest lap of the day for all cars and all classes. Thankfully we had enough cars in TTU that I won a pair of tires as well. Yay! 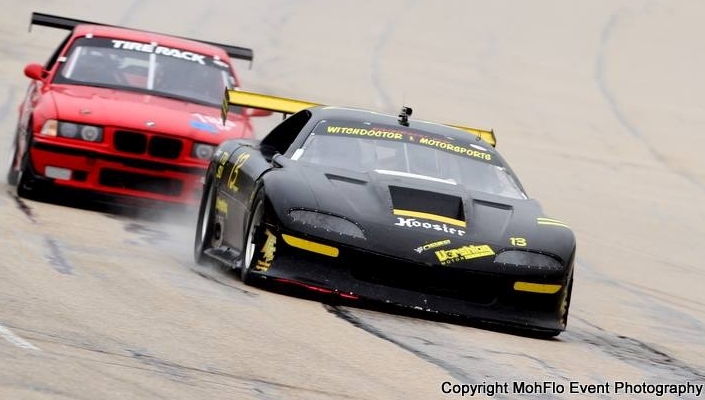 This pic looks great, but about two seconds later that rain-tire shod BMW flew by me into Turn 1 !!! 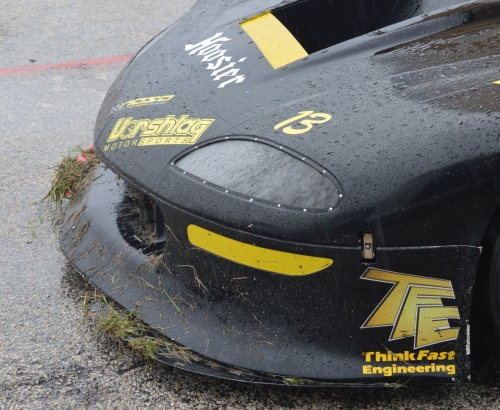 Sunday dawned and the track was dry and the air was crisp and in the distance it looked like rain. Ug. In the first TT session, Marc threw down a blazing 1:44.4 to snag fastest lap of the weekend away from me while I took Anna for a fun ride. Right after that, I re-set air pressures and went out for SU qualy. I followed Troy and while we were not at the front, he very wisely hung back JUST ENOUGH for us to throw down a wicked first lap (while catching traffic only at the very end) and giving both of us a near-clean lap. Great job Troy, and with that, I threw down a 1:42.9 (to Troy's 1:43.8) but that was only the beginning. Next session was the second TT session and I bumped it down to a 1:42.4 and was actually miffed as I made a few small mistakes that cost me a high 1:41 I think. Oh well. <grin>. Sadly, at the end of the longer runs the motor was giving me weird temperature indications again which told me that new cylinder heads would likely be in my near future, but at this point all I needed to do was finish two more races.

winner winner chicken dinner (and a fantastic snap by Anna!!) 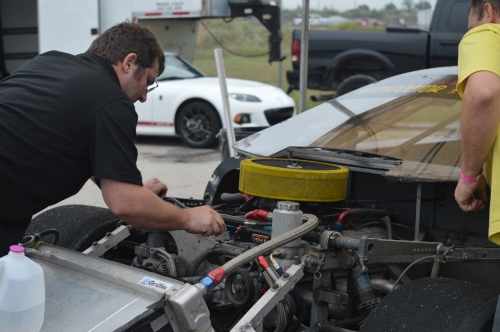 Louis and I vainly attempting to solve the coolant issue .... Misty and Anna working hard to seal the windshield, and they finished with minutes to spare! Thanks!!!

For R3 the rain was imminent and thankfully Anna and Misty tore into Scratcher and spent about 20 minutes and about half a huge roll of duct tape sealing up the base of my windshield. I put on my "rain" (and I use that term really, really loosely) tires and slid in the car to find a fresh wad of paper towels on my trusty stick and I headed to grid. I faded at the start (was on pole with 34 cars) and then worked my way around the track and won my class putting valuable points into the season championship. The stick and sealing worked awesome and I was smiling despite being cold and wet. The hidden bonus of the rain is that I could not push the motor hard and the temps stayed WAY cool despite the coolant issues I was enduring. I did not bother going out in TT anymore, but paid close attention as Marc and Raymund were locked into a championship battle for TT1 and if Marc could win both days then they'd be tied up going into the finale at ECR in a month. Marc and I talked about how competition really forces you to up your game and we were both pushing hard. For TT1, Marc (Z06) ended up with a 1:44.497 while Raymund (Viper) ended up at a 1:44.559! Their championship would be settled at ECR!! 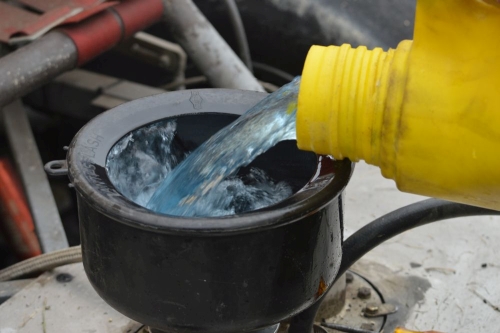 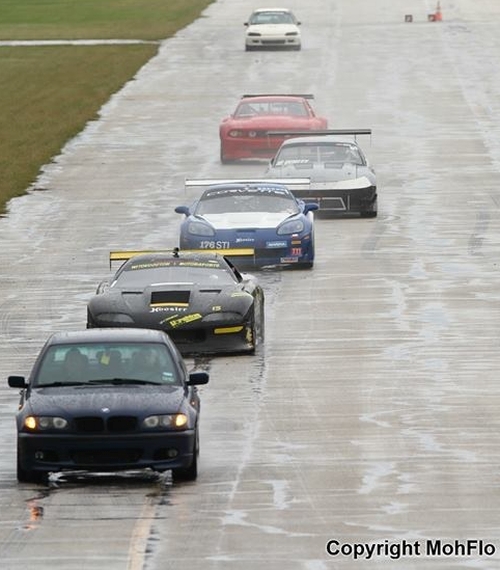 Five of the good stuff! And lineup for R3. See that little Honda in the back? He blew by me on the inside of the carousel like I had dropped anchor!  Front drive AND rains!!

For R4, Anna and I built little deflectors for the inside of the windshield to further help with keeping the windshield clear and I put back on my wet shoes, slid into Scratcher and sloshed over to grid. I started first in SU and with the rain lightly falling a Radical eased by me a few laps in and for just a moment I thought about giving chase as I could easily up my game a bit, but looked across the track as I came down the hill and saw my championship competitor fully a minute behind me and just let the Radical go. I had a championship to win and that was priority 1. The track was drying and my rear tires were rubbing a bit as I flew down the front straight producing some smoke that made control nervous. Glad they didn't black flag me! I finished second in SU and the points difference as I left TWS was now only 10 points (1600 to 1590, with each race win worth 100 points). This championship would be decided with those 4 races remaining at ECR (and the 400 points still on the table), but I desperately needed to get the cooling issue resolved.

For this event though, I won TTU both days, set track records and won another set of Hoosier tires while again setting the fastest lap of the event for all cars and all classes. Knowing it would be unlikely that I'd plunk down serious money for rains, I used my new "winning credits" to get brand-spanking-new rains, solidifying that I'll never again run Scratcher in rain conditions for the next 3 years. Heh heh.

It was a fun weekend, with a huge thank you to Anna of course, but also to Misty and Matt along with Marc and Louis. Everyone pitched in to help and it was well appreciated. Paddocking with these folks is so awesome! 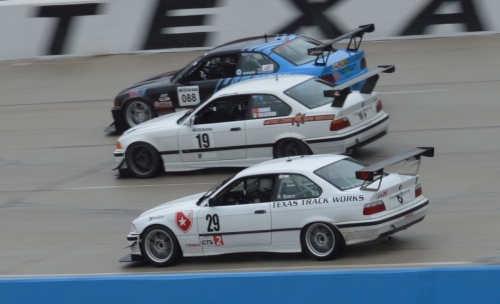 Great brace shot by Anna on the front straight

My first phone call once I got home Sunday night was to get cylinder heads on their way and I had shipping confirmation by lunchtime on Monday. I've got a championship to win and it isn't going to happen with Scratcher being wounded.